I took another trip to the farmer's market on Saturday...and came home with four more pounds of eggplant. This week, it went into pasta alla Norma.

Pasta alla norma is almost as old as the island of Sicily itself. Named after the heroine in Vincenzo Bellini's famous opera, Norma, the two-act performance tells the story of the Druid priestess Norma, whose husband Pollione tries to run away to Rome with the Adalgisa, another priestess. Out of loyalty to Norma, Adalgisa tells her about the affair. Norma considers murdering her two children but decides to leave them with Adalgisa instead. Adalgisa, however, then renounces her love for Pollione and urges him to return to his wife.

Infuriated, Norma calls a meeting with the Druids and declares war against the Pollione's Romans. The declaration requires a sacrifice, which conveniently presents itself when Pollione is caught entering the temple of virgins to visit Adalgisa and is subsequently sentenced to death. Minutes before Pollione's execution Norma, deeply saddened by the turn of events, decides to take his place. Inspired by her benevolence, Pollione rekindles his love for his wife and joins her in the pyre.

First produced in 1831, Norma was immediately hailed a success, so much so that people began using the title as a term of endearment. For example, one's favorite music could be called "musica alla Norma," the best poetry "poesia alla Norma." As the pasta became one of Sicily's most famous dishes, it became known as pasta alla Norma.

I don't know about you, but all this talk about lyric tragedies is making me hungry. Let's move on to the recipe.
The innumerable variations of this recipe typically include:

- eggplant, fried in oil before its added to the sauce
- tomatoes
- cheese
- pasta
-a spicy pepper
-fresh basil

*If you're using a premade sauce (that already includes garlic) instead of tomatoes, consider reducing or omitting the garlic

1. Placed the diced eggplant and salt in a strainer with a bowl underneath, then put something heavy on top. Let the eggplant sit for an hour. During this time, the salt will pull the bitter juices from the eggplant pieces into the bowl underneath the strainer.

2. Fill the bottom of a saucepan with 1/4" of vegetable oil. When the oil is hot (test it), add the eggplant.

3. Stir the eggplant frequently as it fries, being careful not to break the pieces. Add more oil if necessary. When the eggplant has turned golden brown, remove them with a slotted spoon and place them on a plate lined with paper towel to dry.

**Note: now would be a good time to begin boiling your pasta water

4. Discard the vegetable oil from the pan. Wipe the pan clean and return it to medium heat.

5. Add 2 tbs olive oil to the now empty saucepan. Just before the oil begins to smoke, add the garlic. As the garlic begins to brown, add the crushed red pepper and let simmer for 30 seconds.

6. Add the tomatoes and simmer until the sauce thickens, 5-10 minutes.

7.  When the sauce has reached its desired consistency, add the eggplants and fresh basil and let the sauce simmer on low heat for 5 more minutes.

8 Serve the sauce over pasta and garnish with grated cheese and additional basil. 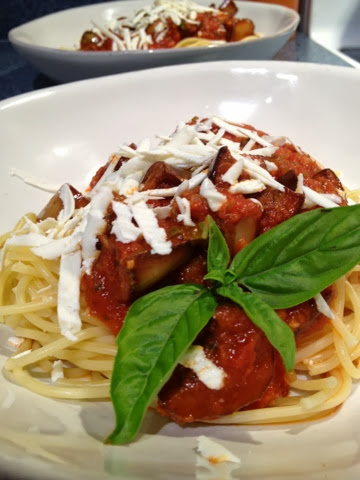